What are the Qualities of a Good Test?
http://www.infoq.com/news/2008/10/qualities_good_test

When to use automated tests
http://ubertest.hogfish.net/?p=75

▲top
十件你所不知道有關Automation的事情 10 Things You Might Not Know About Automation By Linda Hayes, Better Software, Jan/Feb 2009 1. 測試資料是最困難的部份 - Automation is all about repeatability, and if your data is unstable or unpredictable, then your tests can't be repeated. - Consider using your automation tool to load data so you always know the state of your test environment. 2. Record and play 只是商業噱頭, 不應該完全是你實作的策略 - Designed to make it look easy long enough for your check to clear, recorded scripts are nothing more than bad, fragile code. - The mere mention of this term by a vendor should be grounds for expulsion from serious consideration, as it has been proven responsible for untold failed automation efforts. Don't be fooled. 3. Don't write programs to test programs - Don't try to replicate application logic in your tests or you will end up with more code than the application itself has. - Write your automated test to expect the expected and use logic only to recover from the unexpected (我真的不是很了解作者想強調什麼, 知道的人分享一下吧) 4. 量多不一定有用 - Just because automation can run more tests than you can perform manually does not mean more is better. - Every test takes time to design, develop, execute, and analyze. - Worry about coverage, not quantity. 5. 維護性是重要的考量 - We test software because it changes. - If it takes too long to update your tests, you can't keep up and you will have to revert to manual testing to meet schedules. - If a vendor tells you it is easier to re-create the test than to maintain it, run for your life. - Be sure that maintainability is a key quality of any test library design. 6. 不要認為Automation是在最後才能做的 - Anyone who says you can't automate until the application is complete and stable does not know how to design a proper test. - Modern techniques allow tests to be automated before the code is even allowing automation to play a part in even the most agile of environments 7. 不要認為做了automation,就不需要領域專家 - If an automation tool is so technical it cannot be used by the people who know your application best, keep looking. - Programming prowess is not a substitute for domain expertize. - Testing is only as good as the tester. 8. 規劃好內部開發規則 - Establish and enforce naming conventions, design standards, and change control procedures. - Whitout them, you will lost track of your test assets, resulting in duplication and omission. - If you cannot find a test, you cannot use it, and if you cannot make sense of it, you cannot maintain it. 9. 要記錄下你的設計原理 - The most elegant of all architectures has no value if you cannot understand it. many a genius has labored over an approach only to leave confusion behind when he leaves. - Insist on diagrams and documentation that describe the overall structure and the purpose of components. 10. 要請開發人員也加入 - Unless the developers cooperate by deliveing testable code in the form of persistent object names, exposed methods and properties, and enough heads-up on changes for you to react, all of your efforts will be in vain. - Make programmers your partners, educating them about what it takes to automate and supporting them with automated build tests and other time savers.

My theory of software testing - I
http://xndev.blogspot.com/2007/12/my-theory-of-software-testing-i.html 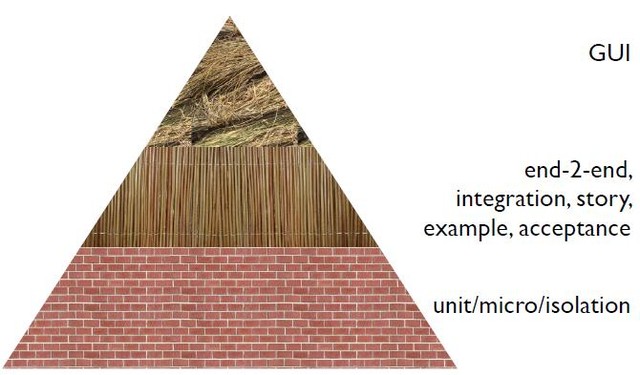 1. Brick tests: unit testing - They tend to run really fast (on the order of 10 to 100 per second) because they run entirely in memory. - - They tend to pinpoint bugs really well. Then tend to be hard to break. Then are hard to learn to write truly well. - They are the single most important thing you can learn to automate. Without a solid suite of wellwritten unit tests, it’s hard to find a software team is that is not basically screwed. - Tools: xUnit, TestNG, MbUnit... 2. Stick tests: 不透過GUI來做測試, 像是end to end, integration等等 - They bypass the GUI, then tend to be less brittle. They are certainly more brittle than really good unit tests, however. - They do tend to be about chunks of behavior as large as a feature, more than about smaller isolated behavior. - They again tend to use real external resources, real-ish data. - They again tend to be large,and to run slowly. By this we mean many minutes, as opposed to a few seconds. - They are building the right thing, much more than building the thing right. - Tools: Fit, xUnit, FitNesse, ZiBreve, Concordian... 3. Straw tests: GUI testing - They tend to use the entire system as a black box, mimicking real-world behavior, talking to all of the real code and external resources and dependencies of the system. - They tend to focus on large chunks of behavior. - Tthey tend to be slow - Tools: Watir, Selenium, Canoo and commercial products... 從這個列表來看, 我們應該要投資在Brick tests, 因為他最快, 開發最省力, 能夠cover的test最多, rework的狀況最少. 可是真實的狀況是什麼呢? 根據作者的調查, 絕大部分的team都投資在Straw tests. 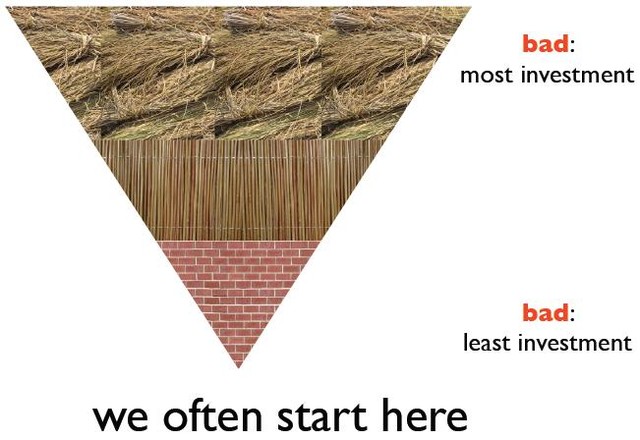 為什麼會這樣呢? 作者認為會比較想做GUI test automation的理由如下: - They are easier, at first, to learn to write - Our programmers “don’t do testing,” because we have dedicated manual testers who at first seem like the logical test automators. - We tend to fall naturally into this pattern: starting with the through-the-GUI tests. 那為什麼不做unit testing的理由如下 We tend not to start with unit tests, because they are hard to learn to do well, because - Programmers are afraid of them, or because programmers feel that they do not have the time or permission to write them. - Sometimes hear software professionals claim that these tests are not worth the effort, that they are not valuable enough. - Here are some of the things a programmer must learn to do well, in order to produce high-value, low-maintenance-cost unit test suites. This is quite a bit to learn.     a. SRP, small modules, mocking/faking, dependency injection, Refactoring, legacy code rescue, TDD, OO, BDD, CI, Design Patterns     b. This is a hell of a lot of work. Unit testing is really, really, hard for most teams to learn. This is especially true when they are already being slogged about by enormous, nasty, untested legacy codebases. 那我們能做什麼去改變這樣的狀態呢? 1. Follow the pain. - This is true for most agile transitions. - Is it really production defects blowing up badly that you want to focus on? And are you constrained in the unit tests you can create just yet? - Are all or most of your tests currently manual? Then it might, in fact, make sense to start with GUI test suites. 2. Early wins;low-hanging fruit. - For such teams, GUI tests are often the lowest hanging fruit, a logical starting place (though a dreadful ending place). 3. The Whole Team owns the transition. - Let there not be fiat testing initiatives from above. - No “THou Shalt Do TDD or Else” directives, nor coverage rate directives. At least, not without the buy-in and input from the entire team. - Let the team self-organize -- testers, programmers, BAs, managers -- around where the biggest pain points are, where the low hanging fruit is, and which steps to take when, while still finding a way to meet ridiculous production schedules. 4. Pair programmers with testers/QA persons. - The parable of the overloaded tester. - There should be no such thing as a group of programmers blocked by testers who cannot test code fast enough. - That’s just a version of “that’s not my job.” Here is what you get when any role or responsibility on the team says “that’s not my job.” 5. Pair programmers with testers/QA persons. - Testing is everybody’s job. 6. Three initiatives: straw, sticks, and bricks. - The team needs to look at these three initiatives as separate. - We need separate plans for enough bricks, enough sticks, and just enough straw. - We need plans for how to increase the bricks as we scale back the straw. 7. Learn to make bricks, no matter what. - And no matter what happens, if you don’t end up with an absolutely great suite of unit tests    on the typical non-trivial project, this means thousands of tests than run in a few seconds    then you won’t ever get your automated test costs down to least TCO levels. - And your code maintain costs, turnover costs, and customer satisfaction costs will all be higher as well. 8. Earn testers freedom to do more Exploratory Testing. - What are the best testers really good at? They are good at sniffing out bugs where others would never think to find them. - This is instinctual, “blink” skill (from Malcolm Gladwell’s book on deep expertise). - Use a great automated testing strategy to buy your testers time to do more and more and more exploratory testing (ET) per iteration. 9. There is such a thing as too little courage, skill, trust, respect

▲top
Google C++ Mocking Framework 五個月前, Google才announce C++ Testing Framwork, 現在Goolge又announce C++ Mocking Framework. 它可以support Linux, Windows 和Mac OS X. Google宣稱內部已經有超過100projects用過它, 大家的反應都還不錯, 以下是他的好處 * Simple, declarative syntax for defining mocks * Rich set of matchers for validating function arguments * Intuitive syntax for controlling the behavior of a mock * Automatic verification of expectations * Easy extensibility through new user-defined matchers and actions 以下是相關的URL: Google C++ Mocking Framework Home Page http://code.google.com/p/googlemock/ Documentation URL http://code.google.com/p/googlemock/w/list Download URL http://code.google.com/p/googlemock/downloads/list Google Mocking Framework Discussion Group http://groups.google.com/group/googlemock Google提供一個簡單的sample: 這裡有一個class ShoppingCart, 它會從server拿到tax rate.   你要測試的狀況是: it remembers to disconnect from the server even when the server has generated an error. class TaxServer {   // Returns the tax rate of a location   // (by postal code) or -1 on error.   virtual double FetchTaxRate(     const string& postal_code) = 0;   virtual void CloseConnection() = 0; }; 這裡demo你如何用mock server去verify class MockTaxServer : public TaxServer {     // #1   MOCK_METHOD1(FetchTaxRate, double(const string&));   MOCK_METHOD0(CloseConnection, void()); }; TEST(ShoppingCartTest,     StillCallsCloseIfServerErrorOccurs) {   MockTaxServer mock_taxserver;              // #2   EXPECT_CALL(mock_taxserver, FetchTaxRate(_))     .WillOnce(Return(-1));                   // #3   EXPECT_CALL(mock_taxserver, CloseConnection());   ShoppingCart cart(&mock_taxserver);        // #4   cart.CalculateTax();  // Calls FetchTaxRate()                         // and CloseConnection(). }                                            // #5 1. Derive the mock class from the interface. For each virtual method, count how many arguments it has, name the result n, and define it using MOCK_METHODn, whose arguments are the name and type of the method. 2. Create an instance of the mock class. It will be used where you would normally use a real object.     3. Set expectations on the mock object (How will it be used? What will it do?). For example, the first EXPECT_CALL says that FetchTaxRate() will be called and will return an error. The underscore (_) is a matcher that says the argument can be anything. Google Mock has many matchers you can use to precisely specify what the argument should be like. You can also define your own matcher or use an exact value.     4. Exercise code that uses the mock object. You'll get an error immediately if a mock method is called more times than expected or with the wrong arguments.     5. When the mock object is destroyed, it checks that all expectations on it have been satisfied. Reference: 1. Announcing Google C++ Mocking Framework http://googletesting.blogspot.com/2008/12/announcing-google-c-mocking-framework.html 2. Mockers of the (C++) World, Delight! http://googletesting.blogspot.com/2008/12/mockers-of-c-world-delight.html 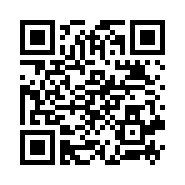